While many European countries, cities and villages are discussing how to solve the ‘migrant crisis’, the rural village of Riace in the South of Italy has found its own way to turn the influx of immigrants and refugees to revive their shrinking village. We at Design as Politics wonder what other places in Europe can learn from the approach in Riace? Why are migrants for example not located in areas where work is available? Can we deal with the refugee crisis not only as an isolated problem, but also as a far more widespread phenomenon? And can we think of ways to bring multiple interests into the picture? … We don’t know the answers yet, but will for sure keep (re)searching, discussing, and talking about this issue. We have an event coming up this week together with Crimson Architectural Historians, and more to come next year, that’s for sure! We’ll keep you posted. 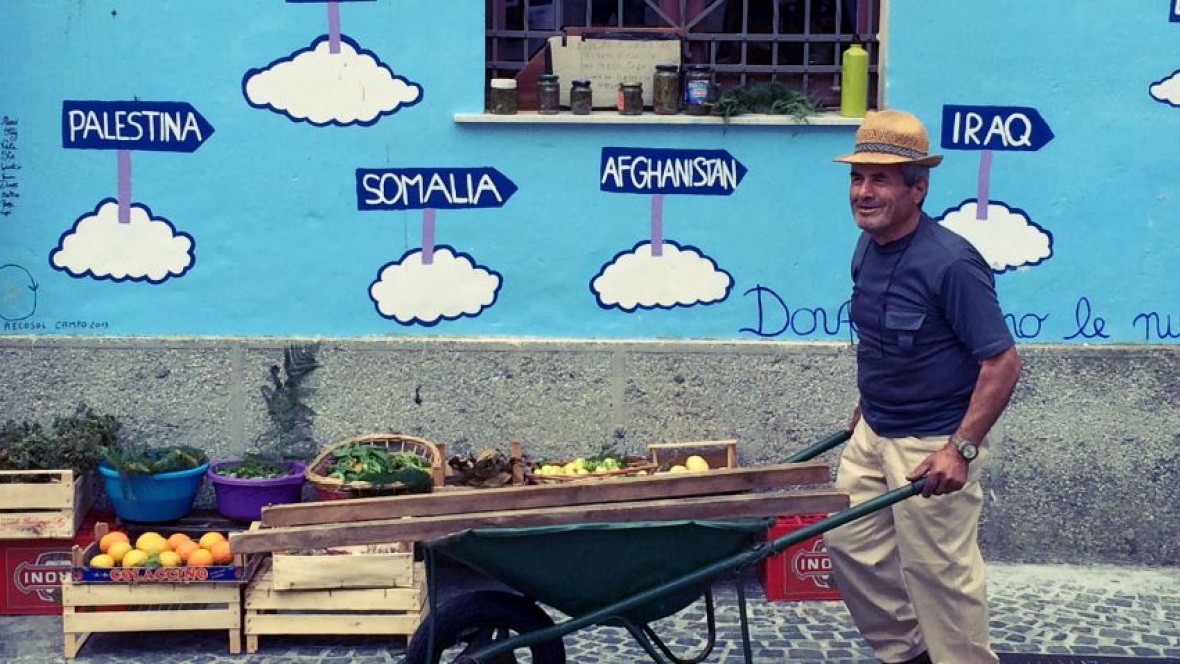 Along the coast in Riace, a small rural village in Calabria, Italy, signs are placed saying: ‘the beach and the sea are free for those who come here to swim, and for those who arrive here swimming.’ Riace – once an almost abandoned village, which was in danger of becoming a ghost town as people left to northern Italy for jobs during the economic growth – has today secured its own future by offering homes and jobs to migrants who arrive in the village. At this moment over 400 hundred refugees and migrants from twenty-five nationalities are living in Riace and make up one quarter of the total population.

Welcoming refugees allowed the village to preserve basic public services such as schools, as well as shops and businesses that had almost all vanished. “Without foreign children, this school would have remained closed” says teacher Maria Grazia Mittica. “But the number keeps changing. Because foreign children come and go.”

According to the mayor of Riace, Domenico Lucano, the arrival of these people creates optimism – both for the people who arrive, as for the citizens of the village itself. “Whatever the challenges, this has to be a better solution for migrants than being locked up in a holding center where their children cannot go to school.”
Some years ago, the mayor of Riace contacted the owners of since long uninhabited houses asking them to make the houses available for refugees and migrants. The houses would be refurnished and a little rent would be paid. Most of the owners agreed. A foundation was established, named ‘Citta Futura’, which would receive 30 euros per day of the Italian State, intended for housing, language training, medical costs and workplaces. The Citta Futura hands out token that can be exchanged for food in local shops. The refugees receive monthly 250 Euro for their daily needs. They can earn additionally 500 Euro if they work. Special workshops are established where migrants can learn old crafts.

30 Euro per day per migrant might seem like a lot of money, but staying in a huge refugee camp costs about 70 Euro per day per migrant. The Riace funding comes from a national protection programme for refugees and asylum seekers, SPRAR, and is granted for one year stay for each new villager. If the year is over and the refugee has not found employment at that time, s/he has to go. According to Lucano, 10 percent of the migrants can stay after one year in the village. Others look for jobs elsewhere in Italy or abroad. It seems sad that many of the people have to leave after one year of living in Riace, but they at least have had the opportunity to learn the language and a profession, while they also have had access to medical care. Conversely, they keep the village alive. Without these people, Riace would be an empty town.

Riace might seem like an extreme example, but we think lots of European cities can learn from the approach of this village in Calabria.

Can we for example locate migrants in areas where work is available to them, like in Riace? In the Netherlands the majority of the refugees are staying in thinly populated parts in the northeast, while most job vacancies are located in the Randstad. This makes it very difficult for migrants to learn the language and to integrate.

Can we deal with the refugee crisis not only as an isolated problem, but also as a far more disseminated phenomenon, and can we think about how to bring multiple interests in the picture? Migration has fundamental causes and it is an illusion that one can solve the refugee crisis by strengthening borders and finding ‘regional solutions’ as some people are arguing. Refugees and migrants spend over a billion euro a year in order to reach Europe, while Europeans pay a similar amount to keep them out. Europe’s restrictive immigration policy has been a windfall for the companies that serve it and for human smugglers. Can’t we use this money for creative solutions instead of paying these companies and smugglers?

The real problem in our cities, countries and societies today is not migration, but the inability to take in and adapt to new residents. By looking at the refugee problem in isolation we are denying that migration has become a fact of life and one that will not increase in the coming decades.