In December we asked Michiel van Iersel, Rene Boer and Mark Minkjan of the research collective Failed architecture to organize a workshop for our graduation students taking part in the studio  ‘A City of Comings and Goings’. They came with the idea to focus this workshop on the border landscape of Schiphol Airport, the main hub for migration to and from The Netherlands.

Together with the Rotterdam Harbor, Schiphol is one of the ‘mainports’ of the Netherlands. Since its origins, exactly one hundred years ago, the airport has become one of the leading aviation hubs in the world. Almost operating at full capacity, they process up to 500.000 traffic movements per year. Instead of just being as a place to get on and off planes, it has grown into an real Airport City, with a mixture of shops, banks, restaurants, meeting areas, hotels and even a casino –  a concept that is now shared with other airports around the world. 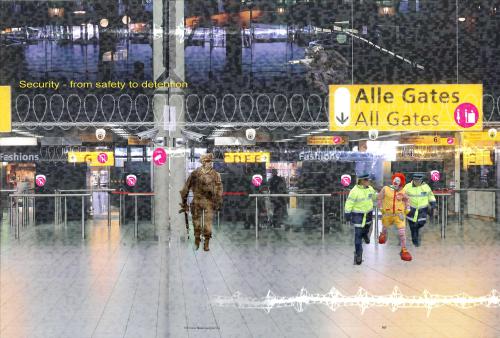 But this seamless shopping environments and transparent terminals, stands in sharp contrast with Schiphol’s security regime. During an intensive three-day workshop at Schiphol Airport and the Amsterdam Museum, students were asked to move beyond standard architectural analysis and to develop a statement or intervention responding towards schiphol’s border landscape – ideally hacking, reinforcing, subverting, breaching or visualize the (sometimes invisible) border of the airport. This resulted in three totally different proposals that shed a different light on Airport City Schiphol.

Choreographing Schiphol Airport – the Game
After visiting the airport, the first group of students stated that Schiphol is not a physical space with social and political consequences, but rather a social and political subject with spatial consequences. Its border landscape is not just outlining a physical territory, but a mode of existence. To translate this statement into an intervention, the group consisting of Yi Yu, Olivia Forty and Ramon Cordova, saw the limitation of movement at the boarding process as a planned sequence that hinders the opportunity to move freely. It is a scenario with a non-ending choreography in which everybody takes part of a pre-assigned role without being conscious of it. As in most choreographies, actors play different roles and not everybody can have the same degrees of apparent freedom. This is where the border landscape manifest itself and divide actors in two main groups: us and them.

But who creates this division? The choreography doesn’t have a single director but rather a set of them. To answer this question, the group developed ‘Schiphol Airport: the Game’, that attempts to show the reality of the airport, as well as a part of the society we live in. The game gives you a sequence of scenarios present in the process of taking an airplane. It points out that even contingency is planned, in order to make freedom of movement impossible. Schiphol Airport: the Game is not trying to solve a specific problem, but rather encourages players to engage in the question on how airports, borders and society can look like if we question the reason behind certain things. 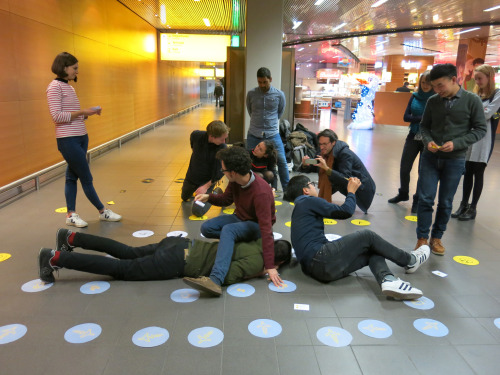 Parallel Runaways
Although there are no permanent residences on the terrain of Schiphol, the airport is frequented by a uniquely diverse community: business men, prostitutes, homeless people and employees. Jere Kuzmanic, John Lau and Lena Knappers were fascinated by the parallel worlds that exist at the Airport. Their project consist of a printed booklet and audio material for three guided tours, that will open your eyes and suck you into the at first glance invisible worlds of employees, security services and weirdo’s that dwell around Schiphol. Each of the stories is made in a way that it gradually engages the person who is doing the tour into these parallel realities until there is no way back. 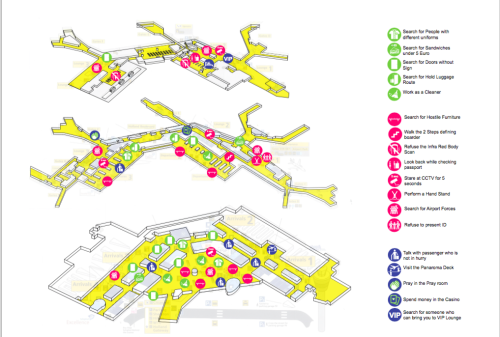 The Serviced World – tour makes you realize that Schiphol Airport has more than 6500 employees. They are part of different services, like security, customs, commerce supply, cleaners, luggage handlers, runway services, cooks, administrative agents, undercover immigration officers and taxi drivers. There is a whole parallel labyrinth of spaces which are used by employees and prohibited for others. During the tour, participants try and find these spaces by discovering all the doors without signs on it or doors marked with a red circle with a white dash. Additionally, try to push your luck by actually pretending you are an employee, carrying out a task!

The From Safety to Detention – tour shows you the border landscape of the Netherlands and makes you aware that you precisely behave according to the script. Unless… The World of Strange People leads you to the bunch of weirdo’s who are in and around Schiphol. You wouldn’t expect it but there are homeless people, prostitutes and airplane spotters all around the airport. They are not visible for everyone – you can only see them when you really start looking…

Border crossing
The last proposal from the group of Signe Perkone, Alon Sarig and Giulia Spagnolo illustrated the Schiphol border landscape by making illegal practices visible during the boarding process. The safety off-board brochure in your front pocket at your seat, informs you about your options for your ‘escape to freedom’. Offered packages provide different options to either dig, clip or make your way to freedom. To illustrate this proposal best, the text below goes over the speakers in the airplane.

“Ladies and gentlemen, the Captain has turned on the Fasten Seat Belt sign. If you haven’t already done so, please stow your ‘escape to freedom’ package underneath the seat in front of you or in an overhead locker. Please take your seat, fasten your seat belt, and act naturally as if you were not entering the country by stealth. If you are seated next to an emergency exit, please read carefully the special instructions card located by your seat. This is especially important, if you are stowed away by the wheels of the plane. If you do not wish to perform the functions described in the event of an emergency, please ask a flight attendant to reseat you, but at the same time we advise you not to draw attention to yourself. If you are using our economy escape package, we suggest you use the flight time to rest and gather your strength for digging. If you are using our luxury package, relax and enjoy the flight, while not forgetting to insert the bionic lenses and put on the identity mask before security checks upon arrival. If you have any questions about our flight today or about how to use any of the items in the escape package, please don’t hesitate to ask one of our flight attendants. Thank you and we wish you a successful escape to freedom.”

A special thanks to Failed Architecture, the Amsterdam Museum and our host and inspiration: Schiphol Airport. Text by Anouk Klapwijk and Lena Knappers