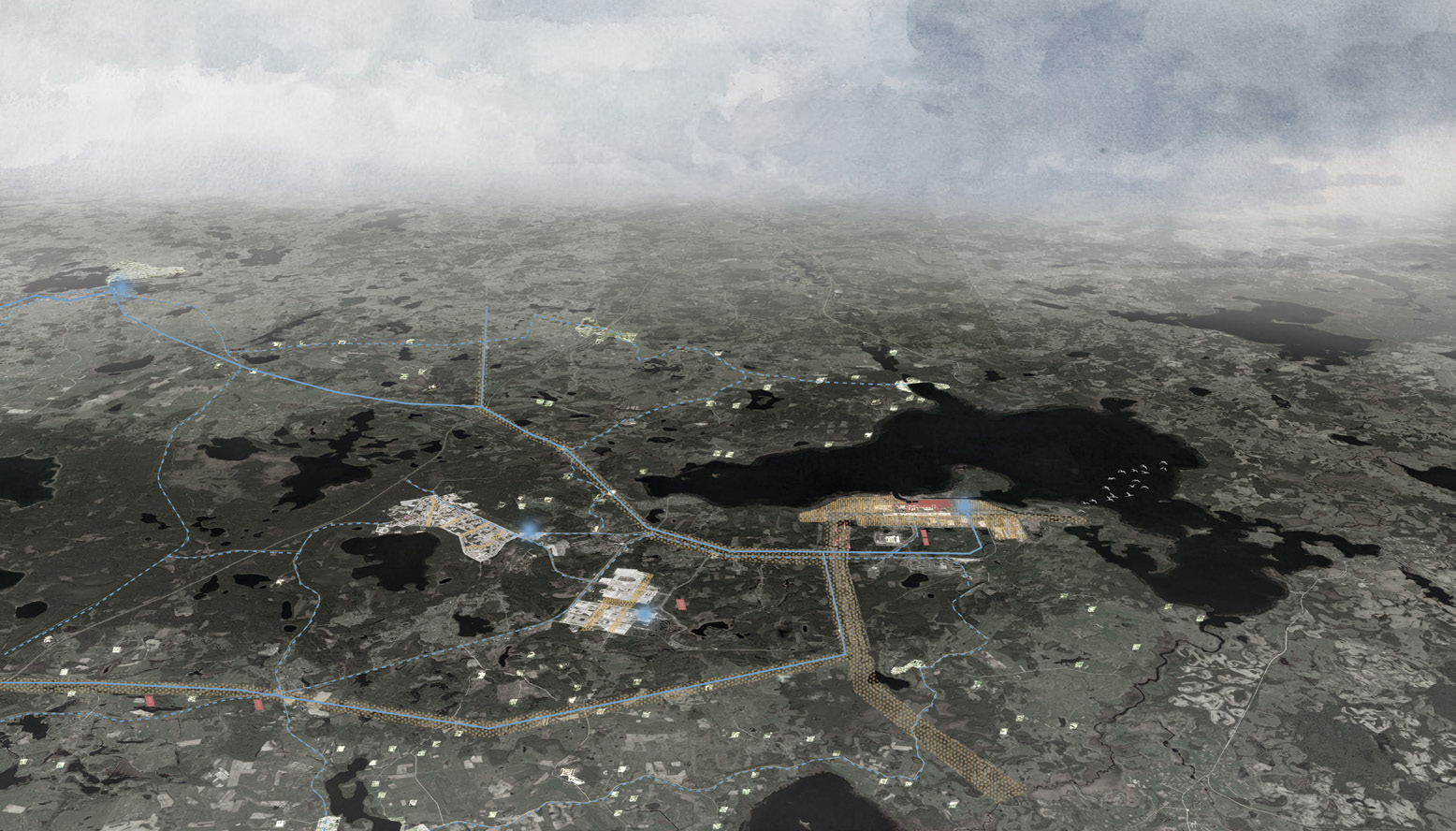 The phenomenon of nuclear energy landscapes emerged in 1960s-1970s, so called the First Atomic Age. Nowadays it is the time when lots of large scale nuclear power plants are being closed all over the world due to political decisions, accidents or the end of operation time. One of such nuclear power plants, the centrepiece of Visaginas nuclear energy landscape, is being decommissioned. This unprecedented process brings a destructive impact to the region. It demolishes not only structures of nuclear power plant but also deletes atomgrad’s economy, population, identity, cultural and technical achievements, threatens built structures in the city and raises questions about the role of the buffer landscape. As a complex process involving various political and technical parties on national and international levels, it becomes a purely technocratic, inert and immobilises ability for locals to influence planning decisions.

The project proposes an alternative to destructive decommissioning process. Instead of deleting the knowledge and spatial structures existing in the region, the strategy exploits the potentials they possess, connects with culture patterns and a history of the place. The derived urban-landscape formation, Atompark, acknowledges its connections with urbanized parts (villages, homesteads, collective gardens and industrial sites) and the diverse natural landscape which no longer acts as a barrier but as integral part of Atompark. The fading large scale nuclear industry lays the foundations for new high-tech energy related industries and supports integration between technology and nature. Atompark landscape becomes a cradle for endangered species and a basis for the biophilic relationships. The remnants of the former nuclear power plant visualize the history of the region. Thus Atompark becomes a boiling pot of contrasts – dense urban environments and very natural biodiverse areas, technological innovations and the remnants of the industrial history, the thrill and threat, the relaxation and work.

The comprehensive strategy with 6 layers is proposed. Each layer covers a different system. The spatial structures of systems are integrated through design interventions on strategic locations in the region. The strategy gives the ability for people to contribute to region’s development, to control radiation, uses phytotechnologies to clean the sites and to prevent from further contamination, biodynamic farms as means to increase biodiversity and for a safe food production in areas with higher levels of radionuclides; it shows an energy transition from centralized energy generation to regional subgrid of distributed energy sources, proposes a stimulation of energy related high tech industries, and preservation of industrial heritage.

Projects emerge through time depending on three milestones: a foundation of research institute, a nuclear power plant gaining non-nuclear object status, a commercialisation of nuclear fusion reactors. The first phase projects aims for healing the landscape and interconnecting, the second phase – building the energy grid and generating knowledge. Projects differ in scale and typology. There are three types: – SITE is an area with specific morphology in defined boundaries.
– NODE is the space that is comprised of inter-crossing paths, public space and the attractor/landmark next to it.
– LINK is a linear element connecting nodes. It is a complex element that includes mobility, energy, nature and/or heritage structures. The LINK between nuclear power plant and Visaginas is a complex element that consists of new wildlife corridors, a new morphological element – a square, bicycle and car paths. These paths are placed in separate spatial corridors which are designed according the mode of transportation. The square contains a stop that acts also as shelter for cyclists and inter-modality points for shared cars and bicycles. It can grow into a homestead in the future with certain limitations.

The mono-functional industrial SITE is proposed to be transformed into a multi-functional park, where heritage, ecological, industrial, cultural activities, energy production and experimental research is placed.The spatial layout of INPP is influenced by relics of existing nuclear power plant. The transformed site is comprised of several linear character zones. The paths cross them transversally, becoming linear stories, which guides visitors through the site and let them experience the change of atmospheres. The town of Visaginas from a “sleeping district” becomes a multi-functional unit, work comes back in the shape of small scale high tech industries and research facilities. Transformations of existing buildings, activation of public spaces are followed by bringing wilderness to the city to strengthen its identity and spatial quality. Interventions take place on the main city’s structure (PATHS): Visaginas main street, secondary streets and a pedestrian street.