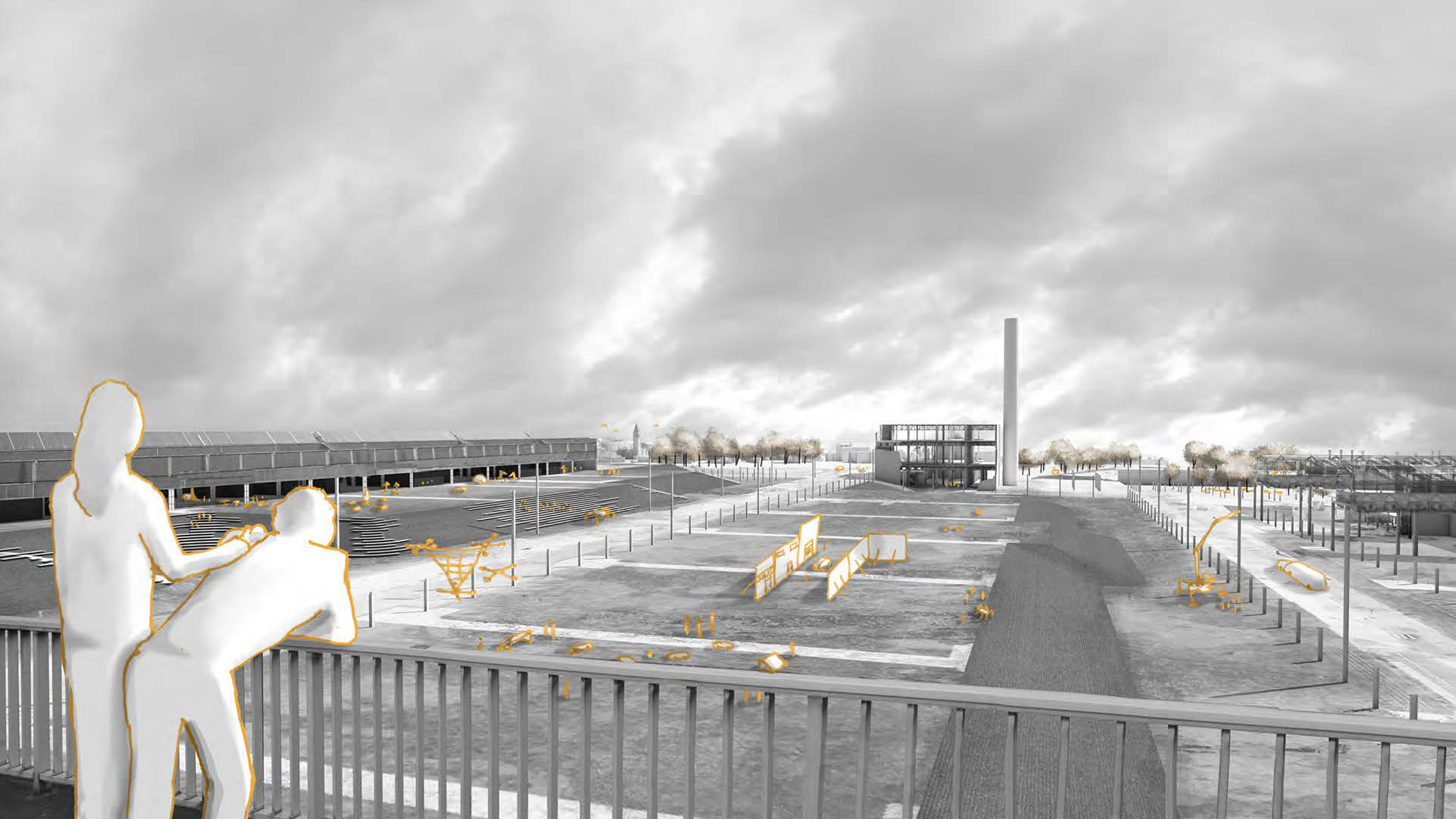 All previous three industrial revolutions shaped the environment through their own planning paradigms. The mechanization of production led to a rapid expansion of cities, mass-manufacturing and the division of labour translated into the functional division of cities and automation raised utopian ideas of mechanized satisfaction of everyone’s needs. These revolutions have all shaped the site of the Opel factory in Bochum, Germany.

The Adam Opel Werk I which is now situated on this location was once a symbol of structural change in the Ruhr Valley. The coal and steel mining industry of the first industrial revolution went through a crisis and the city of Bochum attracted Opel to build this huge factory. However the work in this monument of mass-manufacturing stopped at the end of 2014. The closing will cost 500,000,000€, the factory will be demolished and 45.000 jobs are regionally affected. It leaves behind a disrupted network of work, education and transport. Another structural change becomes inevitable.

From this depressive starting point the project proposes a new direction for another fourth industrial revolution. In the first chapter the ridiculously high investment of money into demolition is accepted, leaving behind “Ruins of Capitalism” that spatially show the destruction of the factory. It criticises the fact that not even a twentieth of the building complex is protected as cultural heritage and proposes to keep also at least the biggest and most impressive of the mass-manufacturing halls, which is still in good shape.

Building up on the old industry, the next chapter explores how the last remaining hall of the factory will be transformed to an “Incubator of a Revolution”. By reusing the given resources, a campus for the research of new tansportation technologies can be created. Collaborative and open in nature by sharing its knowledge and resources it will attract a great local and global community and will give growth to a commons-based local industry. Startups, buisnesses, but also student-housing or other facilities will expand into the hall with minimal effort through modularised building blocks and the help of the existing craneways.

Outside on the vast field of the demolished factory all kinds of new transportation technologies can be tested. Its whole site is publicly accessible providing transparency in the development of these technologies and allowing to build up trust in them. A biergarten, fairs or other cultural events slowly integrate this place in the local community and represent it to other interested parties.

Ultimately this place forms a “Foundation for Transportation”.  A foundation is a common form of organisation for the commons, but it is also a fundament for a development to come. The last chapter shows how this foundation and its developing transportation technologies allow the emergence of a new planning paradigm. With the introduction of self-driving vehicles traditional streets as seperators of flows and linear borders will disappear. Objects will navigate digitally and interact safely with other entities. This allows much more flexible uses of space. Temporal activities will increase, but also permanent architecture can develop more freely.

The transportation technologies and the collaborative nature of this place will lead to a spatial development which is similar to the open-source culture. Projects will be first temporary and manifest themselves as permanent, when they are mature. The utilisation of new information technologies will assist this process, by making communication and collaboration for spatial design easier and by continously analysing the environment for qualities like green spaces, illumination, openness or safety. Vehicles and people will gather this data and can raise awareness of problems, but also can propose solutions to these and soon mobile architecture, that is developed in this place, can be setup automatically, creating a place that is dynamic as its transportation and continously searching and finding itself.