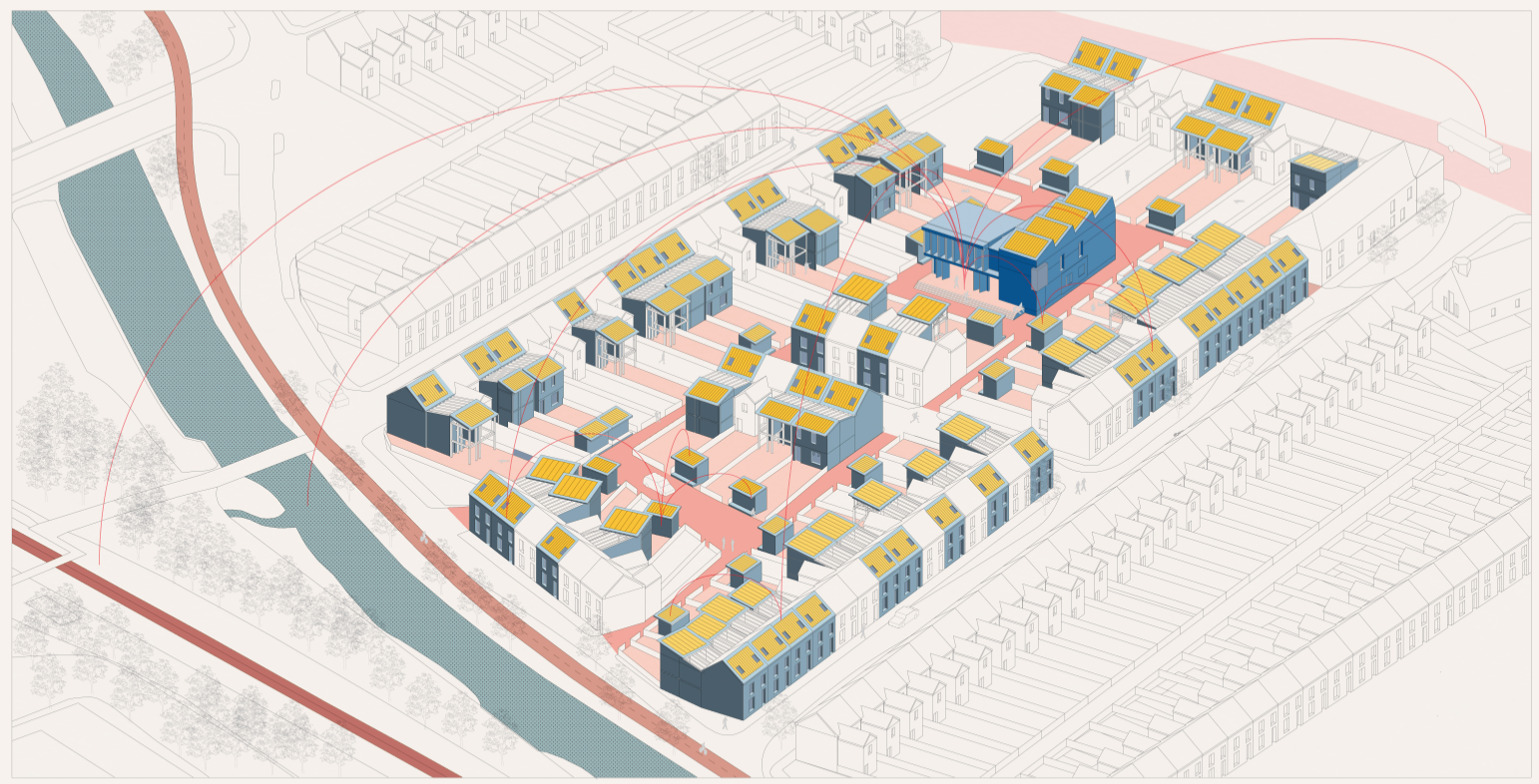 Co-building the Rhondda is an architectural process of housing renewal. Through the provision of a community construction hub, the residents will be empowered to renew their homes though a self-build approach.  This will enable the provision of additional space and surplus renewable energy within the homes, which will transform them into working spaces suitable for a third industrial age.

These productive dwellings will function as a network around  the community hub forming a productive society. Work and society will be re-linked due to the juxtaposition of home, work and community. Thus reintroducing a sense of community pride and worth. Creating a socially and economically successful community will in turn support the Valley wide economy, enabling macro projects such as community energy schemes and the appropriation of empty factory buildings in order to further transform the Valley to have the spatial infrastructure needed for a third industrial age.

The homes would be renewed by gradually replacing the low quality additions to the original  stone terraces with a timber framed extension. The new rooms of the extension would be linked to the existing dwelling by a lightwell which would define an appropriatable multi-functional space; suitable for both work and living. The choice of self-build renewal would give the residents an opportunity to learn new skills and introduce them to the idea of being a maker, an idea essential to the third age economy. Self-build would be facilitated by the design of the structure. Simple pieces of local timber would be CNC cut to the exact length, making them easy to assemble into manageable sized modules. These modules in turn would be simple to assemble accurately into the extension of a home. The first phase (shown above right) would be to construct the post and beam frame and the roof, which would house the new solar panels and plant equipment essential to making the dwellings energy positive. Builders would assist residents with this initial and most technically complicated phase, transferring skills in the process. The residents would be free to fill in the frame as desired and adapt it to their desired end use.

The process of renewal would be focused on a community construction hub where the components for building the houses would be produced. It would be located on a brownfield site or within a derelict building within the network of alleyways that criss-cross the south Wales valleys behind peoples homes, thus being conveniently located to become the hub of the construction and a place of knowledge sharing and a social exchange. It would introduce the idea of collective making and following the renovation of the houses, would continue to be a community resource for the productive community.
The architecture of the hub would echo the home extensions, using the same structural principles and architectonic language, but on a more civic scale. This will enable it to be used as a learning tool for the residents during its construction but also enable them to take ownership of it an adapt and change it over time as needed.

If carried out in multiple locations, these urban blocks would become part of a new urban network of production that would transform the Rhondda Valley into a third age industrial economy. A circular economy would be created with flows of local materials, waste, energy and labour. A demand would be created on a Valley-wide scale for products to be used for home renewal, and for spaces in which to manufacture them. The large derelict former industrial sites would be subdivided using the timber construction system to create new industrial units which would accommodate the new enterprises incubated within the community. The former industrial sites would become centres of expertise which would interact with the national and global economy, and draw wealth back to the region by exporting the timber building system, but also local expertise and the new products which would be developed within the productive valley.

Within this proposal the role of the architect is not necessarily to produce an absolute design, but rather to become an agent to the community that husbands their skills, needs and desires. The architecture produced is an empowering framework, providing the spatial outlines for a strategic transition,  whilst also ensuring a consistent architectural language and quality.